Disclaimer: This is still under construction and is very incomplete, but hopefully it is helpful.

I thought I might be able to help you by including a dictionary of grammatical terms that I will be using in the video lessons.
(I figured that you can use an online dictionary for Spanish-English, but it would be convenient to have definitions of terms we’ll use for Spanish grammar.)

Also, I am not the best wordsmith, so feel free to suggest revisions to the definitions and feel free to ask me to define something not covered (that is relevant to the videos of course) 🙂

article –a word that helps you realize that a word is a noun and also might tell you a little more information about the noun.
Ex: the, a, some
Spanish Ex: el / la / los / las;Â  un / una / unos / unas
In Spanish, the articles follow with the rules of gender and plurality.Â  Also see definite articles or indefinite articles.

AR verbs – verbs that end in the letters -AR.Â  Some common -AR verbs are hablar (to talk), bailar (to dance), trabajar (to work), necesitar (to need)

conjugate – this is when we change the verb.Â  For an -ar verb, we will take off the -ar, and add different endings depending on the form.Â  For regular -er, and –ir verbs, we’ll take of the endings.Â  For irregular verbs , you’ll most likely have the forms memorized.
In English this would be an example of verb conjugation:Â  I eat,Â  You eat,Â  He eats, She eats, we eat, They eat.
In Spanish, a regular present tense conjugation would look like this: yo como, tÃº comes, Ã©l come, ella come, nosotros comemos, ellos comen, ellas comen, ustedes comen.Â  Most of the forms are different unlike in English where only two forms are different.

demonstrative adjectives – these are adjectives that normally show distance between the speaker and the object.
este / esta (this)
estos / estas (these)
ese / esa (that)
esos / esas (those)
aquel / aquella (that (farther))
aquellos / aquellas (those (farther)
These can go before or after the words they modify.Â  In speech, they often go after the words they modify.
Ex:
Me gusta mucho este suÃ©ter. I like this sweater
No comprÃ© la sudadera esa.Â  I didn’t buy that sweatshirt. (speaking)

feminine – if a noun is feminine in Spanish, it usually ends in -a, -ad, or -iÃ³n.Â  We can also tell that a noun is feminine by a feminine article in front (la / las / una / unas) or another word that signals gender.
Ex: la tienda, la libertad, la televisiÃ³n
Adjectives could be feminine if they modify a feminine noun and normally end in -o.
Ex: La chica alta (The tall girl);Â Â  La escuela pequeÃ±a (The small school)

infinitive – this is a verb that is not conjugated or changed.Â  In English this is harder to tell.Â  But you could add a ‘to’ before the verb:Â  Ex: “to run”:
In Spanish these verbs would end in -ar, -er, or -ir.Â  Ex: hablar, cantar, depender, escribir.

irregular verbs – These are verbs that do not follow the normal rules of regular verb conjugation.

IR verbs – verbs that end in the letters -IR.Â  Some common -IR verbs are vivir (to live), escribir (to write), venir (to come),Â  dormir (to sleep)

noun – a noun is a person, place, or thing.Â  In Spanish we can usually tell a noun in a sentence by having an article —most commonly el/la/los/las or un/una/unos/unas –theÂ  before it.

plurality – In Spanish we pluralize nouns by adding ‘s‘ if the word ends in a vowel.Â  If the word is masculine and does not end in a vowel, we will typically add an ‘es‘ to it to pluralize it.Â  We will also change the article to make it plural and if an adjective is modifying the noun, it will also become plural. In the examples below (s) means singular and (pl) means plural.

present tense – when the form is talking about the now or ‘present’.Â  It does not refer to the past or the future, but now.
Ex: I go;Â  We eat;Â  They complain. In Spanish, Yo me voy;Â  Nosotros comemos; Ellos se quejan.
The present tense is easiest to determine with regular verbs, because they have the same endings.Â  You will have to memorize irregular verbs to know what verb tense they are in because they do not follow the rules of regular verbs.

preterite tense – The preterite is what we might use

reflexive verbs – These verbs are most easily recognized by having a -se at the end of the infinitive form.Â  Ex: levantarse, despertarse, alegrarse, irse.Â  When conjugated, they have reflexive pronouns in the various forms.
Sometimes, reflexives are translated as a person doing an action to themself.Â  For example: ‘Yo me levanto‘ translates to ‘I get/lift myself up’.
Other times, the reflexives convey the idea of ‘get + emotion’.Â  For example: ‘Nosotros nos enojamos‘ translates to ‘We get angry’.
There are also verbs that are reflexive where the reflexivity of the verb just changes its meaning from its non-reflexive counterpart. For example: dormir is to ‘sleep’. dormirse is ‘to fall asleep’.

verb – normally the “action” of a sentence (Ex: he ran). The verb could also be linking ideas.
In Spanish we can usually determine a verb by various endings.Â  It might be infinitive, so it will end in -ar, -er, or -ir. If it is conjugated, then the endings will vary but we could figure it out by the ending through studying those forms and verbs.

verb tense – The tense deals with the time the verb takes place in.Â  The basic tenses for verbs are present, preterite, imperfect, future and conditional. 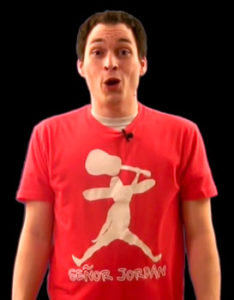 Fill out this form to get in touch with me!